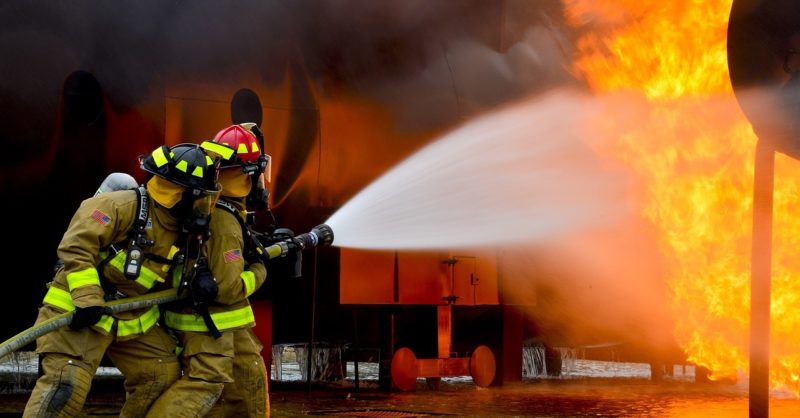 Fire protection in the US has always been a mixed bag because there are very few universal guidelines. Fire departments are usually municipal, rather than state or federal. But, organization is different from one town to another. Across the US, fire departments may be volunteer or professional. Administrative positions like fire chief, fire inspector, and fire marshall may be elected offices. Sometimes they are appointed or hired. Finding a professional job as a firefighter or administrator is complicated. On the other hand, finding qualified firefighters and fire services leaders is challenging.

With all of these variations, education for firefighters runs the gamut. Firefighters may have associate’s degrees or diplomas from community colleges, or just a training course organized by the fire department. In recent years, though, firefighting is becoming much more professionalized. Larger cities and regions are beginning to expect firefighters and administrators to have at least a bachelor’s degree. Fire science degrees programs are becoming a standard all over the US. Students interested in a career in fire protection services would be smart to start there.

Methodology: How We Ranked the Best Fire Science Degree Programs

With these five criteria, students can be sure they’re getting a bachelor’s in fire science rooted in all-around quality, strong student satisfaction, and a solid ROI. Students should consider financial aid and general education requirements.

The University of Florida’s BS in Fire Safety & Emergency Service degree program is available on campus or online from the School of Construction Management. Students are required to complete 120 credit units; of which 60 credits must be upper-level coursework. Degree candidates can opt to specialize in EMS Management, Emergency Management, and a Fire Specialization.

What We Like: UF’s fire science degree program has been received a recognition certificate from the Fire & Emergency Services Higher Education (FESHE) –a designation of excellence.
Degree: Bachelor of Science in Fire and Emergency Services
FESHE Certified

Providence College offers a BS in Fire Administration degree program that has received a FESHE Certificate — denoting the quality of the on-campus or online program. FESHE is an integral part of the country’s National Fire Academy. Students graduate prepared for a career as a Fire Chief, A Battalion Fire Chief, a Fire Inspector, or a Firefighter, among others. Providence College’s emergency management degree program offers a generous transfer policy of up to 75 credit units.

Providence College (PC) was established in 1917. The school’s 100+-acre campus sits on the city of Providence’s highest point — Smith Hill and is home to more than 3,800 students. The school is organized among four schools — Arts & Sciences, Business, Professional Studies, and Continuing Education.

What We Like: The school holds the distinction of being the only institution of higher learning in the United States that is overseen by the Dominican Friars
Degree: BS in Fire Administration
FESHE Certified

3. University of North Texas at Dallas

The College of Health & Public Service offers the University of North Texas at Dallas’ BS in Emergency Administration & Planning degree program. UNT-Dallas’ emergency management degree program is one of just a few fire science degree programs that holds the FESHE certificate of quality assurance. Students have an opportunity to study abroad in Asia, South American, and many other countries.

The University of North Texas at Dallas was established in 2000 as a state university. The school’s 250+-acre urban campus is home to more than 3,500 (mostly part-time) students. The student body is quite diverse with African American and Hispanic student accounting for 75% of total enrollment.

What We Like: The University of North Texas at Dallas is the only public institution of higher education situated within the city limits of Dallas.
Degree: BS in Emergency Administration and Planning
FESHE Certified

University of North Texas at Dallas

What We Like: Holy Family is one of a select few fire science degree programs that has received accreditation by IFSAC — The International Fire Service Accreditation Congress.
Degree: BS in Fire Science and Public Safety Administration

The Archdiocese of Chicago established Lewis University in 1932. The school is recognized as a Lasallian, Roman Catholic institutions of higher education. Lewis University’s suburban campus is home to more than 4,600 students studying for degrees offered by the university’s five colleges/schools. During WWII, the campus was converted to a military area to train pilots.

What We Like: UNO’s Peter Kiewit Institute houses the only $65+ million state of the computer system in the area that supports the school’s bioinformatics and management information systems at a premium level.
Degree: BS in Emergency Management – Fire Service Management

This school is no longer offering the Fire Science program for the school year 2021-2022.

Western Illinois University’s School of Law Enforcement & Justice Administration offers a BS in Fire Administration (that can be completed online) or a BS in Fire Science degree program (which is an on-campus program). WIU’s emergency management degree program has received certification by the Fire and Emergency Services Higher Education Program (FESHE). The faculty is made up entirely of retired or active firefighters and administrators who have real-world experience, and can provide top-notch mentorship – not to mention job market connections.

What We Like: WIU offers students tuition rates (and other expenses) that remain fixed for four years — the first guarantee of this kind in Illinois.
Degree: BS in Fire Administration (online) or Fire Science (on-campus)
FESHE Certified

The California Legislature established Cal State LA in 1947. Cal State LA and is a member school of the California State University system. Cal State LA is recognized as a Hispanic serving institution of higher education and a land grant school. The school’s urban campus is home to nearly 28,000 students.

What We Like: The school is home to NASA-partnered CHARTER program — SPACE — the first government-funded program in the country.
Degree: BS in Fire Protection Administration and Technology

Jefferson College of Health Sciences was established in 1982. JCHC operates with four academic divisions — Arts & Sciences, Nursing, Rehabilitation & Wellness, and Community Health Sciences. The school is home to more than 1,000 students who are represented by Jeff, JCHC’s St. Bernard Mascot. The school holds the distinction of being the longest operating hospital-based institution of higher education in the state of Virginia.

What We Like: JCHC students experience a rotation of internships in various EMS and First Response facilities in and around the Roanoke vicinity.
Degree: BS in Emergency Services
FESHE Certified

The University of New Haven was established in 1920. UNH’s suburban campus is situated between the city of West Haven and the Long Island Sound, and home to nearly 7,000 students. The school operates with six schools/colleges that offer degrees in Fine Arts, Business, Engineering, Arts & Sciences, Criminal Justice and Health Sciences.

What We Like: The school overlooks the Long Island Sound and is only 1-1/2 hours from New York City and 2-11/2 hours from Boston – both prime job markets for firefighters.
Degree: BS in Fire Science
FESHE Certified

Southern Illinois University-Carbondale offers a BS in Public Safety Management degree program that maintains an accreditation certificate from The Fire and Emergency Services Higher Education Program (FESHE) and the International Fire Service Accreditation Congress. SIU’s emergency management degree program is designed for students who have already earned a minimum of 26 credit units, or hold an associate’s degree from a regionally accredited institution of higher learning.

Southern Illinois University-Carbondale was established in 1869 and holds the distinction as the flagship member school (and the third oldest) of the Southern Illinois University system. The school operates with several campuses in Carbondale, Edwardsville and Springfield IL. SIU is organized with ten schools/colleges, including the College of Applied Sciences & Arts, that offer nearly 250-degree programs.

What We Like: Southern Illinois University’s library system is recognized among the top 50-academic/research libraries in the country.
Degree: BS in Public Safety Management
FESHE Certified

What We Like: Hampton is also recognized for an established education program dedicated to Native Americans that operated for approximately 50 years.
Degree: BS in Public Safety – Fire Administration

Salem State University was established under the supervision of Horace Mann in 1854 as a normal school. Their suburban campus is just north of Boston and operates with six campuses that offer degree programs to nearly 9,400 undergraduate and graduate students. Salem State University offers an innovative series of speakers which has included in the past Gerald Ford, Bill Clinton, George HW Bush, Jay Leno, Tom Brady, Maya Angelo, and Robert Redford.

What We Like: Fire science degree candidates are required to participate in a fire science internship, with numerous opportunities throughout the greater Boston region.
Degree: BS in Fire Science Administration

Lake Superior State University was established, in 1946 as the Salem Normal School. Lake State is Michigan’s smallest public institution of higher learning. They operate with several campuses located in Escanaba, Gaylord, Petoskey and Dearborn, MI. They also participate in joint academic programs with two institutions of higher learning in Ontario, Canada — Algoma University & Sault College. Lake Superior State University is situated near the US-Canadian border. As a result, Lake State is home to many Canadian students.

What We Like: Lake State’s fire science degree program holds the distinction as being the first internationally accredited emergency degree program in the nation.
Degree: BS in Fire Science

Some jobs in fire prevention and hazardous materials need only a high school diploma, but others need a full degree.

One of the most desirable jobs within the fire department in most cities is the fire protection engineer position. The duties of fire protection engineering jobs vary widely. Generally, those who hold these jobs within the fire department often ensuring the usage of non-flammable materials in construction, engineer fire escape routes in buildings, and sometimes work on the equipment that protects firefighters when they are putting out a fire. These fire jobs are generally a bit hard to come by, as each fire department jobs hiring committee may only be looking for one or two.

There are many other fire-related careers. If you’re asking ‘What can I do with a fire science degree?’ you may have to think outside the box to find the job you want. There are many careers involving fire science besides fire safety engineering and arson inspection. When it comes down to it, ‘What can I do with a fire science degree?’ may include advanced firefighting positions. Of course, these positions require more experience than most careers involving fire science. Also, different fire departments will likely have different advanced firefighting positions. These different positions will likely be created based upon the fire safety challenges of the area.